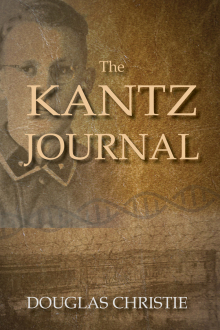 When sixteen-year-old Connor Finney discovers his father, Robert, has died of a sudden heart attack, he becomes consumed with reading a mysterious old journal that he hopes will contain clues to his father’s death.

During WWII, a Nazi physician identified a heart attack gene that killed every male that inherited it, a finding that remained hidden for over seventy years until it re-emerged in the research of a graduate student, Geoff Carter, at the University of Miami Medical School in Florida.

Connor teams up with Carter and together they start using modern genetic methods and cryptic data embedded in the Nazi’s journal to uncover what could be the most lethal genetic killer of the century. But they’re not alone: Robert’s widow, Robin, Carter’s thesis adviser, Dr. Trevor Smith, and several international players are all on the hunt to gain The Kantz Journal’s secrets, and each has their own intentions about how to use this critical information.

If Connor, Carter and Robin can’t harness the information first, Connor may have a ticking time bomb in his DNA just waiting to detonate when he turns forty—leading to the same fate as his father.

The Kantz Journal by Douglas Christie is available at Amazon.com